Surveying is the preliminary and primary step to kickstart any kind of project properly.

There are different types of surveying methods available to discover the earth’s surface. The right surveying method is chosen depending on the size and existence of hindrances on the land. What is the plane table surveying?

In surveying, when the earth’s surface is assumed to be a plane, and the curvature of the earth is omitted, it is called Plane Surveying.

The plane table surveying is a simple and easy method where the plotting and field observations are done simultaneously. The map of the land prepared while doing the fieldwork.

Moreover, plane table surveying could help to measure the land area where the compass survey method may fail due to the magnetic field.

Parallelism is the principle of a plane table survey. Two or more stations will be plotted to measure the land, and the drawn line passes through the station point. We already discussed the plane table surveying instruments in detail.

Setting up the plane table

Three simple, easy steps can do the setup of a plane table survey instrument. In the picture below, I is the centre point of the station. A, B, C, D, E points are fixed by using the alidade and the distance of those points measured by the chain link. 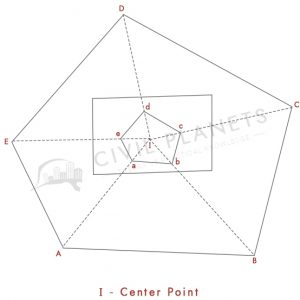 A and B are fixed to point out the P. Line will be drawn from both stations and the intersecting point is noted as P.

To reduce the errors, few check lines are plotted to get the accurate land map. We can get the length of the check line by using simple triangle formulas.

In the three-point method, three known points are selected which have already plotted on the map—the new station point obtained by bisecting the three points by the following method.

This is more like drawing a demanding pic using tracing paper. In this method, the plane table (aka station) will be set up at one point where three known points are visible. First plot the radiating lines (sighting three known points) on trace paper by sighting the three points. Once finished, place the tracing paper on the drawing and try to match the radiating lines passing through the corresponding points previously plotted. Finally, the position of the station will be established.

This is also more like a three points method. The only difference is instead of three known points, here we use two known points. There are two cases. 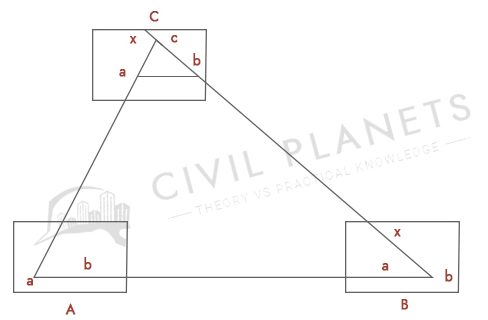 Like on every surveying, the plane table will be impacted by the following errors. So try to avoid or minimize the errors.