What is a gravity dam?

A structure that is constructed in such a way that its own (self) weight of the material is used to resist the external force (pressure) created by the water and other materials is known as gravity dam. It is constructed either by concrete or by masonry. Each section of a dam is designed to achieve the self-sufficient weight to resist the water pressure and to protect the structure without any damage. 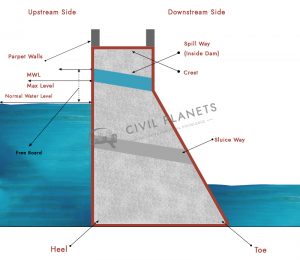 As we already discussed in types of loads acting on a structure, every structure has it’s set of dead load, live load & environmental loads. 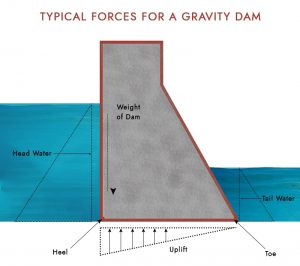 There are 7 loads acting on a gravity dam such as,

Let’s discuss each in detail.

The main force or pressure that acts on a dam.

The water stored creates horizontal forces on the upstream side of the dam. The total pressure created at H/3 level can be collected from hydrostatic pressure distribution.

The water pressure distribution at H/3 level will be analyzed for 2 typical cases, Have you been to the beach?

When you are at the seashore, the waves seep under your feet and run off the sand, which makes you feel that you are going to fall.

The Uplift pressure is also more like that. When the upstream side has water, it seeps through cracks, pores & fissures of the footing material of the dam creates a hydraulic gradient between the upstream and downstream side.

The gradient will create a massive uplift force which will eventually reduce the effective weight of the dam. 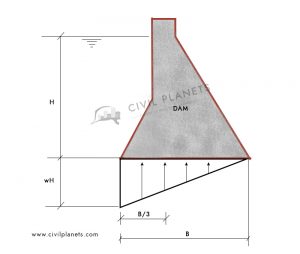 Silt deposited on the upstream side of the dam will be analyzed for any vertical forces if the dam is sloped. The silt content deposited will be neglected at first, since there will be no silt deposit on the slanting side.

However, after some time the silt deposited on the slanting side will act as a horizontal force on the upstream side which helps to minimize the uplift force acting on the dam.

It can be calculated by measuring the height of the silt deposits on the upstream side.

h – the height of silt deposited

Φ – angle of friction of soil

In seismic zones or nearby high susceptibility earthquake areas, the dam is needed to resist the earthquake forces.

The earthquake creates movement on both the dam structure and the water in the reservoir. So the design needs to be analyzed for the possible pressure by storage water hydrodynamic and dynamic loads on dam inertia of the dam.

Water stored in the upstream reservoir waves on the surface of the water area by the atmospheric wind. It creates pressure on the upstream side of the dam and pushes towards the downstream.

Wave pressure can be calculated by below formula,

V – Velocity of wind in Km 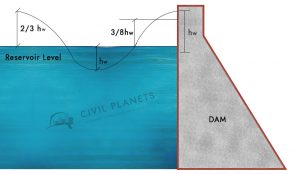 The maximum force created by wave action is  Pw = 2.4 Υwhw and acts at mid-level (hw/2) above the still water.

In cold countries (western countries), the ice may be formed on the surface of the water. It melts and often expands, which creates thrust force. The dam needs to be analyzed for the possible thrust pressure exerted by the ice forming on the water surface.

It acts linearly along the length of the dam. The magnitude of this ice pressure ranges from 250 to 1500 KN/m2 upon the climate conditions. For ordinary circumstances, it will be considered as 500 KN/m2

Self Weight of Dam

Most basic load (Dead Load) pressure. It is the resting force that resists all the external forces acting upon the dam. It can be calculated by

In an upcoming post, we will see the design analysis of Gravity Dam, where we can use the above-mentioned formula in detail.