It is bizarre if you compare the current coastal line with the old age coastline. The seashore line is different now because of erosion.

Contents of the Article show
1. What are coastal structures?
2. Why do we need coastal protection structures?
3. Natural Causes of Coastal Erosion
4. How can we protect our coastlines?
5. Types of Coastal Protection Structures (Artificial)

The tidal waves eroded the seashore line. It has happened naturally for many years and is still continuous.

What are coastal structures?

The structures constructed to prevent these human-made structures from harmful sea erosion and other sea activities are called coastal protection structures.

Why do we need coastal protection structures?

The 4 Main types of coastal erosion are

The fact is that we can not stop these seashore erosions, but we can control them. General buildings, such as residential or commercial, should not be constructed within the coastal line.

How can we protect our coastlines?

The coastlines can be protected by using natural or artificial structures. The natural coastal protectors are mangrove, dune, seagrass & coral reefs.

Those natural protectors control the height of tides & reduce the erosion of shorelines. It increases the land height to the sea level.

Many researchers are trying to save the mangrove and other sea-related plants, which helps very much to protect our coastlines. Moreover, the sea-related plants are implanting in the seashore to restrict the erosion of the coast.

The seawalls are also called revetment. The seawall is constructed parallel to the shoreline and is built by rubble mound, granite masonry, and reinforced concrete.

The seawall function is to reduce the destructive sea wave velocity and prevent the erosion of the seashore.

The types of seawalls are mentioned below.

The different types of seawall used based on the force of the sea waves.

The pile foundation method is used to construct the curved face seawall. The curved portion reduces the force of the sea waves and avoids dune erosion from the shore.

The curved face seawall is preferable, where the high force sea waves occur.

The stepped face seawall is suitable to prevent the sealines from medium force tides. It is constructed by a special concrete structure, which reduces the height of waves and restricts the erosion of sea sand.

The gap between the sheet piles is placed by the geotextile membrane to stop the seawater seepage.

The rubble mound seawall construction is economically excellent & easy to construct. Large riprap stones are placed in front of the beach to avoid sand erosion. It can sustain & restrict even the high force of sea waves.

Gravity structure and anchored sheet pile walls are the two types of bulkheads used in construction to protect the coastlines. The concrete, steel, or timber used to construct the bulkheads.

The main purpose of the bulkheads is to retain the earth’s bed from scouring, and it is not much sustainable against high force tides.

Bulkheads are provided to save the upland soil sliding towards the seashore.

The groins are constructed vertically and perpendicular to the seashore by concrete, steel, and rubble stone. Its length, height & permeability categorize the groins.

The primary construction purpose of groins is changing the pattern of sea waves which come near to the shore.

Based on the type of construction, it is classified as permeable and impermeable groins. 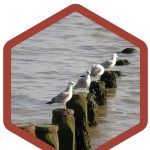 The construction cost of the jetty is high, and it is constructed by concrete, steel, or wood. Jetties are built near to the harbour or river estuary to avoid the formation of sandbars and control the flow of water.

The projection of jetty is perpendicular to the seashore and built to an extent far from the shore.

The breakwaters are constructed parallel to the seashore. The primary function of the breakwater is to reduce the force of the sea waves before it reaches the shore.

The types of breakwaters are mentioned below.

We have to spend much more money on artificial coastal protection structures. Particular types of cement & construction methodology have to be used to construct artificial structures.

Whatever we do we can only reduce the effects of erosion and are not entirely stoppable. The natural coastal protections should be appreciated and saved from the harmful activity.

Bala is a Planning Engineer & he is the author and editor of Civil Planets.