The entire structure elements such as beam, column, and foundation are the supporting parts to transfer the load that a slab carries. There are two types of slab according to the area and load handling.

What is One Way Slab? That means anyone of the slab’s sides is two times greater than or equal to the other side.

Load Handling – In one way slab, the slab transfer the load in only one direction to the adjacent beams as shown pic

To support the bending moment, the main bars are provided in a shorter span. What is Two Way Slab? Load Handling – In two way slab, the slab transfers the load equally to the adjacent beams in all direction as shown pic 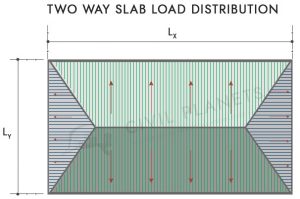 Difference between One Way Slab and Two way slab