But those tests are not suitable for high fluidity concrete.

The self-compacting concrete is the high fluidity concrete used where the reinforcement is congested, and vibrating is not possible at all.

What is the L Box Test?

The test used to find the passing ability of freshly mixed self-compacting concrete in the reinforcement is known as the L box test.

It is conducted at a site or lab to find the passing ability of fresh concrete used in underwater construction work in Japan. The L box test is done as per BS EN 12350-10, not by Indian Standard. 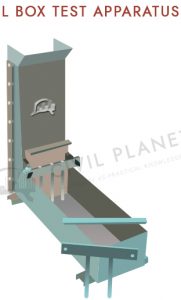 The L box should be free from dust & other impurities. Dampness will be applied inside the box. The ratio between the concrete depth of horizontal and vertical portion is the passing ratio of the SCC concrete.

Generally, the recommended blocking ratio of self-compacting concrete is 0.8 to 0.85. The flowing of the concrete at the end of the horizontal portion is having proper segregation.

What is Development Length and Lap Length?