As we all know, the reason behind using reinforcement in concrete.

Recap – The concrete is strong against compressive force & weak against tensile force. So we use reinforcement bars to increase its tensile strength.

The reinforced concrete is used in construction because of excellent durability, workability & high strength. It doesn’t mean that it will sustain any chemical reactions. The concrete also has some defects and the corrosion is one among them.

What is corrosion of reinforcement in concrete?

The chemical & electrothermal reaction induced by environmental circumstances over a long period which causes the reinforcement bars to get rusted and disintegrated is known as corrosion in concrete. 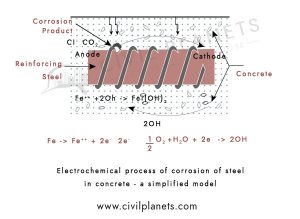 The chemical reaction happens in the following manner,

When two or more materials get in contact, which has distinct surface characteristics such as electric conduit and reinforcement, it forms concentrated cells.

Those concentrated cells will be formed near reinforcement bars due to the differences in the concentrated, dissolved ions like salt, alkalis, acid & chloride, etc. It creates an oxide layer over the reinforcement.

Like an electric battery plus & minus point when two or more materials are used in concrete, it acts as an Anode Reaction – The iron cells lose the electrons and pass on the concrete & turn as Ferrous ions.

Cathode Reaction – The remaining electrons are mixed with water & oxygen, which flow into the concrete.

Finally, an oxide layer is formed on the reinforcement & it becomes rust for over a long period. At last, the corrosion affects concrete strength.

If you read the process above, you probably found that without oxygen and water, the corrosion layer does not acquire on the reinforcement. Any defects that allow water or oxygen to enter the reinforced concrete leads to corrosion.

Effects of corrosion in concrete

How do you prevent rebar corrosion on concrete?