The concrete gives excellent strength and enough durability for the structure. We also know the usage of steel in concrete. There is no doubt!…

But why do we need Prestressed Concrete?

You may see the crack formation under the concrete element after completion of the structure. It is happening due to the load applied on the concrete top surface after hardened, as shown in the below picture. Initially, the concrete element deforms at the mid-portion and, after a long run, the crack forms on the concrete.

We can rectify those issues for small scale structures using chemical mixtures. But It becomes difficult for large scale structures such as bridges, dams, and high rise buildings. The rectifying cost also becomes very expensive.

The prestressed concrete technology has been introduced to prevent those issues from happening on large structures.

What is meant by prestressed concrete?

High tensile stress-induced artificially on the reinforcement bars of concrete before the placement is called prestressed concrete. After completion of structure work, It helps the concrete to detain the shrinkage crack formation. As above said, the steel reinforcement bars are stretched before the use of concrete. So when the load is applied to the concrete, it resists the formation of cracks on the concrete.

Prestressed steel technology is already in use for decades. 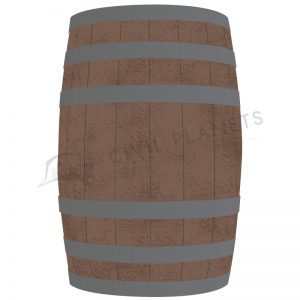 You may be aware of the wine wood barrels tied in peripheral by the steel band, which is already prestressed. The liquid stored in the barrel creates pressure to the surface, which the steel band resists and prevents the barrel from breaking.

The prestressed concrete is attained in two methods such as

Pre Tensioning is done by stressing the wires or strands in the concrete to a predetermined stress level before pouring the concrete in place. The steel tendons are tensioned using a rigid block at one end and a hydraulic jack at the other end, which is used for anchorage. Please refer to the below pic. After completion of concrete pouring, the reinforcement bars are released when the concrete attains the hardened stage. Now the steel tries to shrink due to concrete stress. Since the steel has already been stressed out to its max, further movement of steel has been barred to avoid the cracks.

The concrete used for pre-tensioning should have a minimum 28 days compressive strength of 40 N/Sqmm as per IS 1343.

The post-tension has been done after the hardened state of concrete. The reinforcement is placed with the desired groove or hole throughout the concrete.

When the concrete attains sufficient strength, the tensioning of the steel bar would be done by a jacking device. After the tensioning, the gap in the groove will be grouted thoroughly to prevent steel corrosion.

When pre-tensioning is impossible for some cases like lack of heavy element transportation for large bridges to transport the heavy precast elements, post-tensioning methods will be used.

The concrete used for post-tension should have a minimum 28 days compressive strength 30 N/Sqmm as per IS 1343.

The material manipulating in prestressed concrete should have good quality and strength.

Concrete – High grade of concrete should be used in prestressing, impermeability, durability, and abrasion resistance. The concrete should possess high compressive strength.

The concrete ingredients should be free from dust and other marine impurities, which will affect the strength of concrete, and it may lead to the formation of shrinkage crack.

The proper water-cement ratio should be used to prepare the concrete and, if required, admixture can be used.

But the main drawback of using lightweight aggregates is the loss of prestressing is high due to the higher elastic deformation.

How to Calculate Staircase Concrete Quantity?